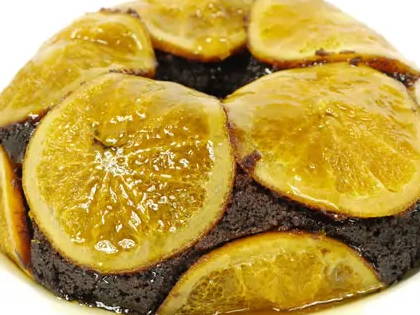 My memories of steamed puddings from my childhood are delicious warm sticky pudding with hot custard on a cold night.

The recipe below is a little more fiddly since the oranges need to be glazed but it is well worth the effort and it looks and tastes stunning.

I have an old fashioned steamed pudding bowl that has a hole in the middle and a lid that screws on the top. Otherwise use a stainless steel or ceramic mixing dish that is about 1.2 litres

Pour 300 ml water into a saucepan and add the sugar, Cook over a gentle heat until dissolved.

Thinly slice each unpeeled orange into 6 – 8 slices Submerge in the sugar syrup. Place a circle of parchment paper on top of the oranges in the pot and cook gently for 30 – 40 minutes. Lift the oranges out gently and place on a rack to drain.

Boil the syrup until it reduces by half (watch carefully – it is easy to turn into sticky toffee.

Butter the pudding bowl and place a disc of parchment paper in the base of the bowl. Place the best orange slice on top. If you are using the traditional bowl with the hole in the centre omit this step.

Line the bowl with the slices of orange.

Cream the butter, muscovado sugar and orange zest until light and fluffy. Add in the orange marmalade and an egg at a time. Sift the flour, baking powder cinnamon and cocoa into the mixture and fold in gently.

Spoon into the orange lined pudding bowl. It should come about three quarters of the way up the sides. Smooth the surface and cover with a disc of parchment paper.

Screw on the lid of the steamed pudding bowl otherwise follow the following directions:

Take a large sheet of foil and fold in half, make a pleat in the centre and place over the basin (the pleat will allow the pudding to expand). Tie the foil around the basin with string and cut away the excess foil.

Stand the basin on a trivet in a deep pot, (if you don’t have a trivet place a tea towel in the bottom of the pot.). Fill with water so it comes about 6cm up the side of the bowl. If you have too much boiling water it will enter the pudding bowl . Put the pot lid on and gently simmer for 2 hours, topping up with water if required.

Remove the lid or foil and insert a skewer in the pudding. If it comes out clean it is cooked. If not recover and steam for a little longer.

Loosen the pudding around the bowl with a thin knife, put a plate on top of the bowl and turnover. It should come out clean.

Trickle a little of the reserved syrup over the pudding. You don’t want the syrup coating the plate so judge it carefully as the pudding soaks up the syrup.